Explaining Newton’s Laws of Motion by Examining a Car Accident

Understanding laws of motion in car crashes will help you if you are ever in an accident. Using Isaac Newton's three laws of motion, as well as static and kinetic friction, two types of collisions can occur. These two laws of motion examples are elastic and inelastic, depending on whether the cars bounce upon collision or not. Read more in our guide below explaining Newton’s laws of motion by examining a car accident. 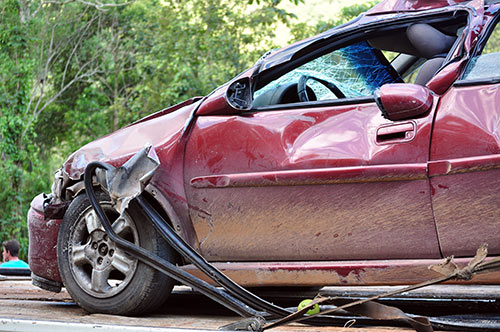 According to the National Highway Traffic Safety Administration, there are over 6 million car crashes each year in the United States. Many of these are not very serious, while others cause extensive damage and even death. The cause of an accident can vary from distracted driving to poor road conditions, but the results of the crash can be explained using physics.

To understand the effects of a car accident, you first need to understand a core concept discovered by Sir Isaac Newton. Born on December 25, 1643, he attended the Free Grammar School in England and then went on to study at Trinity College in Cambridge. In college, he developed an interest in math, physics and astronomy and graduated with a bachelor’s degree in 1665. His attempt to continue his education was postponed by the plague which caused the college to temporarily shut down and force Newton back home. In 1666, he was only 23 years old when he first started developing theories related to gravitation. After Trinity College reopened, Isaac Newton was able to accept a fellowship in order to complete his masters degree. By 1686, he presented his laws of motion in the Philosophiæ Naturalis Principia Mathematica or Principia. This three book series outlines his following three laws:

To learn more about Sir Isaac Newton and his three laws of motion, please visit these sites:

Friction is an important element to understand when examining the physics of a car accident. Friction is simply the force between a surface or object as it moves over another. There are two types of friction, static and kinetic. Static friction is the force needed to get an object moving from a resting position. You can think of a car tire on a road. The two objects exert friction against each other and that force must be overcome to make the tire turn, moving the car. Kinetic friction is the force needed to keep an object in motion. Using the same example of a tire on a road, there is still friction between the road and tire so to keep the tire and car moving, additional force must be maintained or else the tire will stop turning and the car will stop. Read more about static and kinetic friction:

When mentioning types of collisions, we’re not referring to “head on” or “single vehicle”, but rather the two general types in physics: elastic and inelastic. An elastic collision is one where two objects collide and then “bounce” apart such as what happens when to rubber balls come into contact with one another. An inelastic collision is one where the objects collide but do not bounce away from each other. An example of this is a car ramming into a wall. Certain safety features of automobiles have been created to utilize these forces such as your bumper. At low speeds, the bumper is designed to bump the object that is impacted without causing damage. At higher speeds, instead of bumping the object that was hit, the force will crumple the bumper in order to release some of the energy from the collision. Here are additional resources to help better understand the different types of collisions:

Effects of Collisions on People

Passengers in a vehicle that is involved in an accident are impacted by several forces. These forces can be calculated using physics, tested with crash test dummies and computer simulations and integrated into new safety features. Below are several resources that provide more information about the effects of collisions on people:

Resources for Students and Educators

Save Money and be Green at Home: Guide to the Three R’s of the Environment
Sexual Assault in College: Prevention, Support, and Inspirational Quotes
Urban Bicycling Safety – A Complete Guide to Biking Safely in the City
In the Car, At Home or At School: Fun and Educational Games for Kids