Our collection of U.S. volcanoes information and resources for kids is great for educators or parents with children interested in learning about volcanoes. If you’re interested in which volcanoes are currently erupting or showing activity, the Smithsonian Institute offers a weekly volcano report. Read now for more information and how to do your own volcano experiments at home. 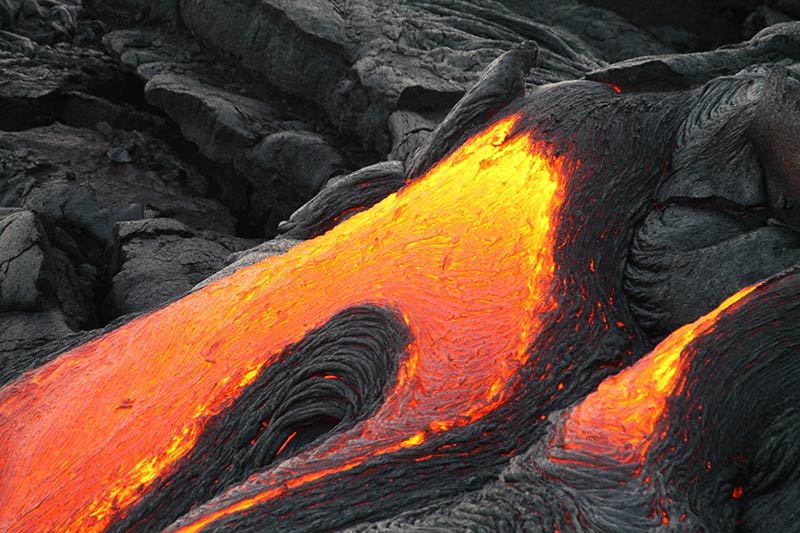 A volcano is formed by an opening in the crust of the earth through which molten lava has forced its way to the surface. There are 169 active volcanoes in the United States. The majority are located in Alaska, while others can be found in the western half of the contiguous United States as well as in Hawaii.

If you are interested in what volcanoes are currently erupting or showing activity, the Smithsonian Institute offers a weekly volcano report.

Volcanoes can often be found where tectonic plates meet. However, there are some, such as in Hawaii, that are formed more towards the center of the plates. Volcanoes usually form when weak areas in the crust move across magma chambers. Magma is hot molten materials including silica and rocks. Once it reaches the surface, it is called lava. This lava is what creates the shape of the volcano. As it spills onto the surface and cools, it adds to the terrain. Eventually, after multiple eruptions, a mountainous volcano is created.

There are different types of volcanoes. These are:

Dome volcanoes form over time and are created by a series of explosive eruptions. Calderas have very large openings caused by the collapse of the top of a volcano. Stratovolcanoes can be very steep and tall. They are formed by lava as well as volcanic rock and ash. Cinder cones are formed by gas that carries molten lava to the surface. Shield volcanoes can be quite tall but are not usually as steep as stratovolcanoes. They are usually formed almost exclusively by lava flow.

There is a lot that you can learn about volcanoes:

Volcanoes in the United States

Two of the most famous volcanoes in the United States are Yellowstone and Kilauea.

Yellowstone park is in Wyoming as well as Montana and Idaho. The park covers nearly 3,500 square miles, while the volcano itself is estimated to be approximately 34 by 44 miles wide. This super volcano is located on a hot spot that has created significant super-eruptions over millions of years. The three eruptions that were large enough to be classified as super-eruptions occurred 2.1 million, 1.3 million, and 630,000 years ago. Even today, hot magma still flows beneath the park. Active geysers, including the famous Old Faithful geyser, can be observed in the park.

Kilauea is a shield volcano and it is the most active volcano on the planet. It can be found on the Big Island of Hawaii. Because it is so active, its Hawaiian name translated to “spewing” or “much spreading.” It has a 2-mile by 2-mile wide summit caldera, although it does not have the traditional mountainous features or height that is commonly associated with volcanoes.

In addition to these two famous volcanoes, there are others with features worth mentioning:

There are many more volcanoes to be explored in the United States. They often make great hiking and skiing locations as well as places to view wildlife and explore the great outdoors. Before heading out to any volcano, make sure to check for recent volcanic activity or warnings in the area.

Volcanoes can make excellent science project topics and the set up for the experiments can be fun as well. The explosions are probably the best part. Volcano explosions can be simulated with a variety of materials and chemical interactions. Below are links to the plans for three fun experiments that can be tried at home or in the classroom:

Are you ready to learn more about volcanoes? There is plenty to explore. Learn all there is to know about magma, lava, domes, super volcanoes, tectonic activity, and more!

Bullying in the U.S. – Rates, Tips and Resources
Urban Bicycling Safety – A Complete Guide to Biking Safely in the City
Cars, Trains, Planes, and More – Transportation Vehicles in the U.S.
Life and Death: Exploring Haunted Houses in the U.S.